Elon Musk reveals that for Tesla, increasing profits will always be a higher priority than democracy, sustainability and climate justice. 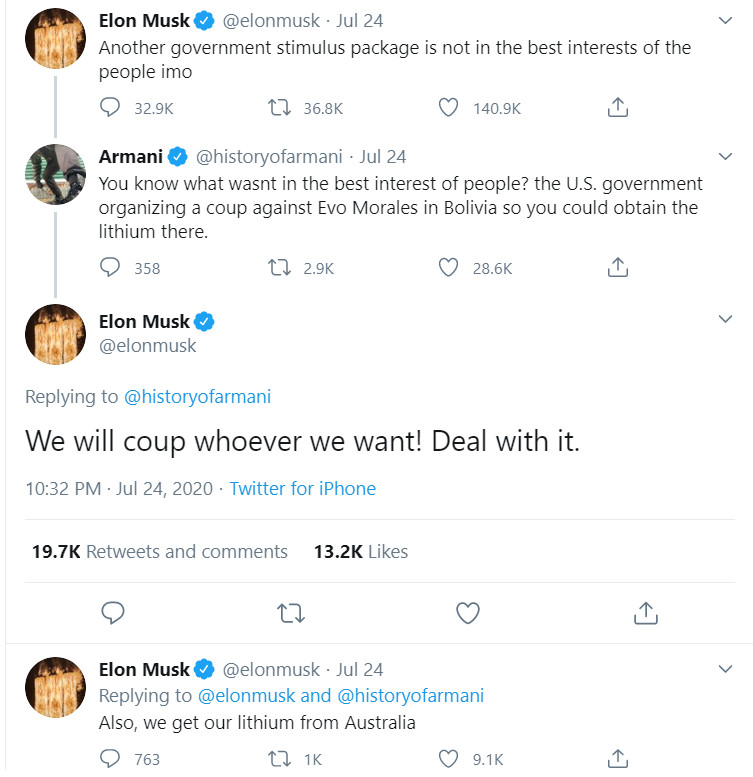 Billionaire Tesla and SpaceX CEO Elon Musk took to Twitter on Friday to criticize the prospect of an additional government stimulus package. “Another government stimulus package is not in the best interests of the people imo,” tweed Musk on Friday morning, quickly drawing criticism on its own right. In a highly revealing thread, some responses to Musk’s tweet resulted in the Tesla CEO openly admitting that extractive capitalist interests were behind the overthrow of Evo Morales’ government in Bolivia in 2019 and that Tesla and other multinational corporations will have coups against anyone they want in order to make a profit.

When someone named Armani (@historyofarmani) said, “You know what wasnt in the best interest of people? the U.S. government organizing a coup against Evo Morales in Bolivia so you could obtain the lithium there,” Musk responded with a shocking tweet: “We will coup whoever we want! Deal with it.”

For context, this all has to do with the 2019 election in Bolivia and subsequent overthrow of President Evo Morales, despite the fact that he won the most votes.

Allegations of electoral fraud published by the Organization of American States (OAS) were widely circulated, and Morales was soon forced to flee the country as the Military took over. As reported in The Grayzone, leaked audio shows that at least six of the Military coup plotters were trained at the U.S. Military’s School of the Americas, which has been linked to other coups in the region in the past.

Jeanine Áñez was never elected and has repeatedly postponed elections, most recently citing the Coronavirus outbreak to justify holding onto power. One of her first acts as Interim President was to massacre indigenous people who had come out to protest in support of Morales. Bolivian Police began tearing the Indigenous Wiphala Flag off their uniforms, and Áñez’s administration declared that “Pacha Mama (Mother Earth) will never return to the (Presidential) palace.”

Although Donald Trump immediately applauded the Bolivian Military’s removal of President Morales, more recent studies and reporting in the New York Times have contradicted the OAS report and shown that the allegations of voter fraud were unsubstantiated. With Morales having fled the country and unelected Áñez in power, the damage to democracy in Bolivia has been done, but calls are growing for the OAS to acknowledge and apologize for their role in legitimizing the coup.

What does this coup have to do with Elon Musk? Well, it all comes down to a highly valuable element of the periodic table: lithium.

Bolivia has the world’s largest known supply of lithium, and it’s enough to make Elon Musk’s mouth water. Salar de Uyuni, in southwestern Bolivia, is the world’s largest salt flat and home to an estimated 50-70% of the world’s lithium. The only problem was that the left-leaning government of President Evo Morales had nationalized the mining industry since 2007, allowing for expansion to primarily benefit the Bolivian people and making it harder for multinational corporations to exploit the people and resources of Bolivia.

Only a week before the Coup, Morales canceled a 2018 deal with a German company called ACI Systems Alemania, ACISA, that makes electric car batteries from Lithium. As reported by Bloomberg, this partnership’s ambition was to produce batteries for Tesla, one of ACISA’s clients. Morales canceled the deal that would have further opened the Uyuni salt flats to ACISA & Tesla on November 4th. By November 10th, 2019, Morales was forced to resign and soon fled to Mexico.

Although Musk follows his tweet claiming “we will coup whoever we want!” by saying, “Also, we get our lithium from Australia,” this has nothing to do with his company’s plans for the world’s largest lithium reserves in Bolivia prior to Morales’ cancellation of the deal. Furthermore, the stock price for shares of Tesla shot from around $250 per share to more than $300 per share between October 23rd and 25th as anti-Morales protesters took to the streets, primarily white settlers from the eastern provinces who have opposed Morales’ government since he became Bolivia’s first Indigenous President.

Tesla has also sought to build battery factories in Brazil, where President Jair Bolsonaro’s anti-Indigenous policies have resulted in the genocidal destruction of the Brazillian Amazon to make way for industrial agriculture, logging, and mining. As a result, scientists are warning that we could be only a year away from an irreversible ‘dieback’ of the Amazon, which would be a catastrophic tipping point for the climate of the region and the entire planet.

With the only Indigenous President of an Amazonian Nation-State removed, the Vice Presidential candidate for interim President Jeanine Áñez, Samuel Doria Medina, has now publicly invited Musk to have Tesla mine lithium from Bolivia for the batteries it’s planning to build in Brazil.

Elon Musk’s tweet appears to be an admission that Musk, who as a billionaire has benefited greatly from capitalism (beginning with his father’s emerald mine in Apartheid South Africa), has also benefited further from the removal of Evo Morales. Only a month before the coup, Morales delivered an impassioned critique of capitalism at the United Nations in September 2019: “The underlying problem is in the model of production and consumerism, in the ownership of natural resources and in the unequal distribution of wealth,” Morales told world leaders gathered in New York. 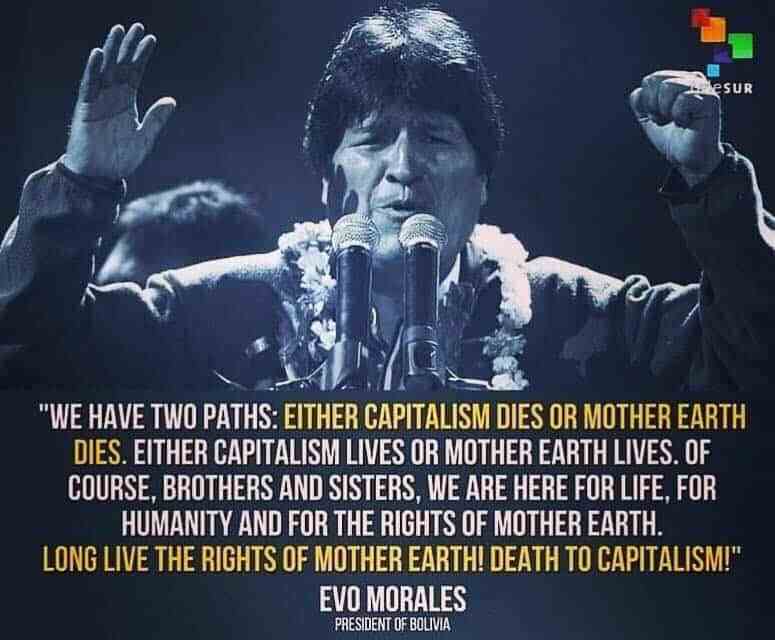 While he was in power, Morales enshrined into Bolivian law a framework establishing the Rights of Mother Earth (Pacha Mama), and was a major critic of the neoliberal ideology of ‘free trade’ and limitless resource extraction that lies at the heart of Tesla’s expansion.

Back in the United States, Tesla has managed to fare the storm of coronavirus better than other automakers, but Americans should be very concerned with Musk’s comments. While seemingly absurd, the temptation to dismiss them as a ‘joke’ neglects how white nationalists claim ‘irony’ online to normalize fascism – in this case, an Anti-Indigenous and Anti-Democratic Military Coup.

Not only does Musk’s tweet represent a complete disregard for democracy and international law, but Musk’s comments also reveal that green-washed capitalism will swallow entire nations whole while slipping on the mask of environmental sustainability.

The so-called sustainability of the electric automobile market in the United States comes with social, environmental and moral costs that can be easy for U.S. consumers to ignore because they happen in countries far away. The damage done by lithium mining in Chile has been extensive and well documented, with Bolivia poised to be next now that Morales is out.

The true cost of the false solution of electric cars underscores the need for larger systemic change in countries like the United States. Instead of simply switching from gas to electric cars, the United States should make investments in mass transit and bike/pedestrian-friendly cities to reduce the overall need for cars. Many of these projects have been proposed already, but been crushed by financial interests behind the automobile industry.

When it comes to the climate crisis, Elon Musk is no leader, having invested billions in going to Mars while seeking to work with the Brazilian Government at the forefront of the destruction of the Amazon. The Bolivian coup and Musk’s apparent endorsement of it should crystallize the fact that the same systems of exploitation and extraction that have created the climate crisis have no place in solving it. To find real solutions, we must look to Indigenous Leaders who have been fighting on the front-lines of the crisis for hundreds of years. To achieve climate justice, we must not only end a fossil-fuel based economy, but we must also stand against any corporation that uses anti-democratic imperial force to try to control vast amounts of natural resources against the will of the people.

What is an Earthship? At the corner of 41st Street and Lancaster Avenue in West Philadelphia, Rashida Ali-Campbell is pioneering the world’s first urban Earthship.  An Earthship is a type of sustainable housing structure first developed in Taos, New Mexico by architect Michael Reynolds. The autonomous, off-grid house takes care of human’s six basic needs […]

Youth climate activists addressed the US House Climate Crisis Committee and Foreign Affairs Subcommittee Wednesday, September 18. All of the committee members who spoke seemed to agree that climate change is a serious threat, but the congress members and activists clashed over how, and to what extent, the United States should act. Meet the Activists […]

Last year, global attention briefly coalesced around fires ravaging the Amazon Rainforest. As the novel coronavirus, COVID-19, continues to affect the whole world, Branch Out reported in the past weeks that deforestation is the leading cause of new infectious diseases. In addition to threatening global public health, deforestation threatens the very existence of the Indigenous […]

2 Replies to “Elon Musk tells truth about Bolivia, Tesla’s anti-democracy profiteering: ‘We will coup whoever we want!’”