Maritime shipping companies have long looked to the Arctic Ocean for a way around the infamous Suez Canal. Now because of climate change, the Northern Sea Route is about to open. But are the benefits for business worth the cost of the climate crisis?

The skyscraper-sized container ship stuck in the Suez Canal, the Ever Given, was freed Monday morning following more than a week in which the 1300-foot-long ship had been stuck in the canal on its voyage from China to the Netherlands, causing a massive maritime traffic jam. The resulting bottleneck in the world economy has reportedly cost the Suez Canal Authority about $15 million per day and delayed billions of dollars of global trade.

With the full impact still playing out, major shipping company Maersk has warned that delays will ripple through the global economy. In some regions, the effects can already be seen. Syria, for instance, whose residents are already suffering from deprivation under the weight of the ongoing war and U.S. sanctions, was forced to further ration its fuel consumption due to the blockage of the Suez canal. This incident highlights both the importance of the Suez Canal to the global distribution of fossil fuels as well as the uneven consequences and vulnerabilities inherent in depending upon such a system.

The importance of the Suez Canal when it comes to fossil fuels has not been lost on climate activists, and the failures of early efforts to remove the massive ship have also served up an abundance of memes. 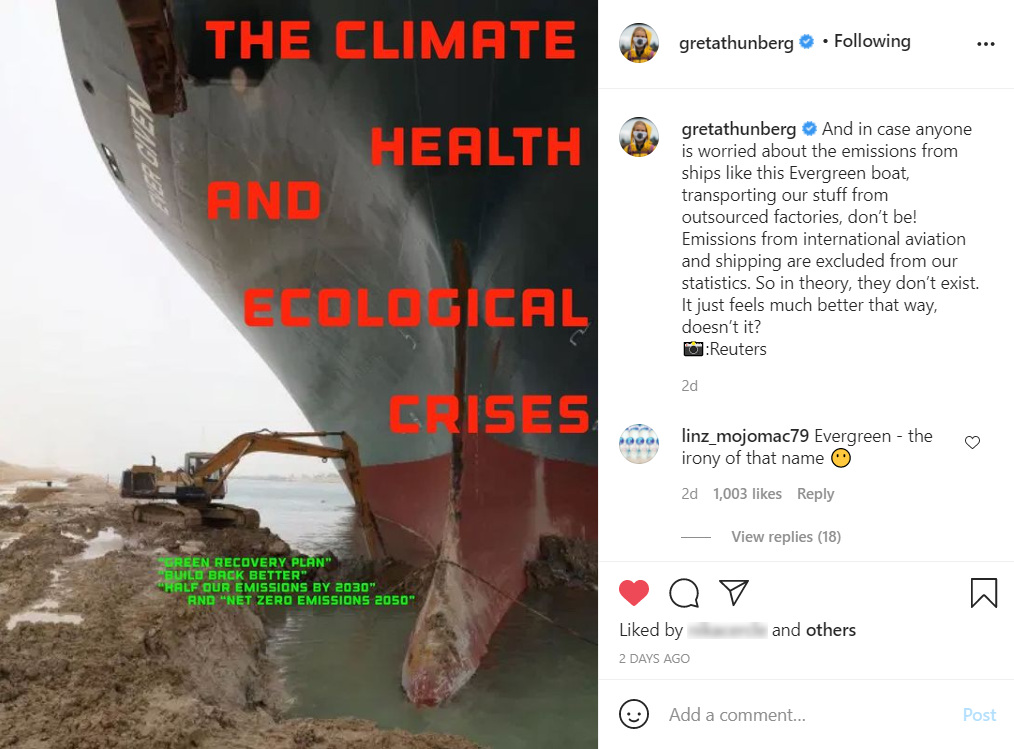 The meme invokes what Greta and many activists view as inadequate commitments of various companies and governments to meet the enormous crises of Covid-19, global warming and mass extinction of the Earth’s biodiversity. As Greta notes, the emissions from maritime and air cargo shipping are not factored into the 2015 Paris Climate Accords nor are they in many other international climate initiatives – making the industry an importantl, yet neglected, source of pollution.

Although it has only just become a meme, the Suez Canal has been a chokepoint for world trade and colonial conflict since its inception. The Ever Given getting stuck is a fascinating case study in the long history of world events centered on this geographic point. Yet, because of Climate Change, the Suez Canal’s dominance in global affairs may soon rapidly decline.

The maritime shipping industry has already been looking North to save time and money in shipping cargo around the world. As the rate of Arctic ice volume loss continues to accelerate, brand new cargo shipping channels are opening up in the Arctic, and if this trend continues, the Suez Canal will become far less relevant to the numerous cargo ships, such as the Ever Given, which are traveling from Eastern Asia to Europe. Russia is already taking advantage of the Suez Canal crisis to promote the new route which runs largely along the country’s northern edge. 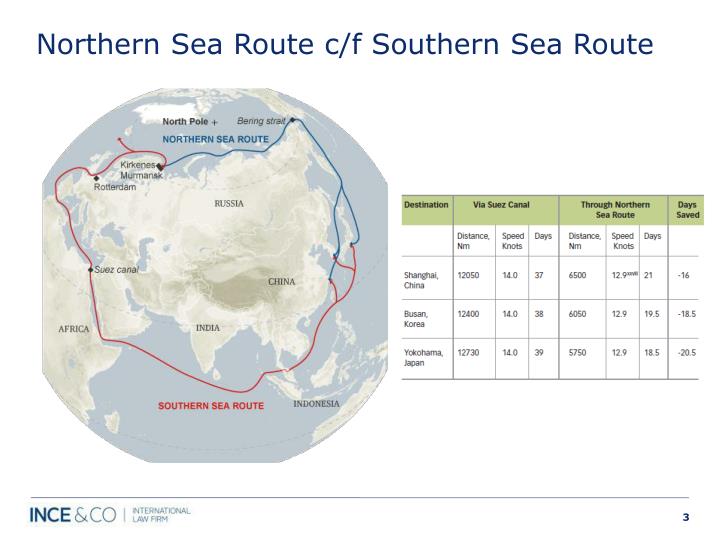 Back in 2018, Maersk sent a trial voyage through the Arctic Ocean on what the shipping industry often calls the Northern Sea Route, or NSR. With the assistance of a Russian ice-breaker ship, this voyage was completed again in February 2021 when the NSR would have been frozen solid if not for unprecedented arctic warming. On the most recent voyage, a  Russian-owned tanker carried Liquified Natural Gas, LNG, from China to the remote Russian port of Sabetta.

Of course, LNG is a fossil fuel that contributes to global warming, in turn allowing cargo to be shipped through the Arctic due to unprecedented melting. Sea Level Rise is already the most damaging effect of melting ice, and climate scientists predict at the current rate, a billion people will be displaced and their coastal communities destroyed by 2050. Further arctic melting will also soon trigger a devastating warming tipping point because instead of the ice reflecting the sun’s rays back into space, the sun’s heat will be absorbed by the ocean waters.

With the stakes so high, it’s no surprise that the maritime shipping industry, which accounts for about 3% of global greenhouse gas emissions, has come under pressure to develop zero-emissions shipping vessels. Maersk claims to be able to use a carbon neutral biofuel if the customer pays for it, but the science of biofuels remains murky, with many studies suggesting that the mass production of conventional biofuels harms the environment in numerous ways.

If we continue full steam ahead burning fossil fuels, a ship blocking the Suez Canal will appear trivial compared to the problems we will face. In fact, the climate refugee crisis, mass extinction and the degradation of our environment are all serious and interrelated effects of climate change, and they are all already occurring. Compared to the six-day block of the Suez Canal, however, there aren’t immediate solutions as straightforward as shoveling ourselves out of climate change. So, how can we break free?

The Ever Given getting stuck in the Suez Canal serves as a potent symbol for how absurd global capitalism and the belief in endless economic growth has become. In order to stop greenhouse gas emissions, we have to take a hard look at the lavish materialism of many countries like the United States, mass production, the global flow of goods and our dependence on globalization for everything from PPE and semiconductors to cat food and toilet paper. Importing goods from around the world not only outsources and increases pollution, but it also leaves the world vulnerable to many unforeseen consequences such as an Empire State Building sized boat creating a massive bottleneck, or oncoming sea-level rise drowning the infrastructure of our port cities. 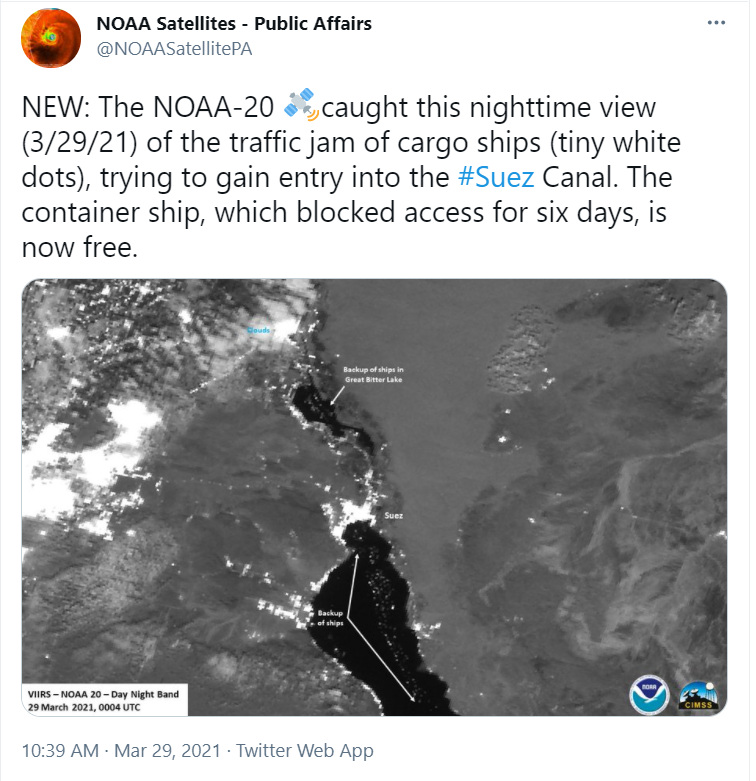 Using the Northern Sea Route would seem to solve this one vulnerability and create new opportunities, but here, the neoliberal logic of maximizing efficiency and profits, which has massively increased greenhouse gas emissions to cause the climate crisis, points toward ways to profit from the crisis rather than prevent it. Here lies the conflict of interest for the shipping industry: committing to any action that would significantly cut emissions and stop arctic melting will in turn make the prospect of NSR opening up year-round less likely. The prospect of shipping goods across the arctic is an incredibly profitable one that will allow global corporations to move goods more efficiently, so in general, “free markets” have little motivation to reach zero emissions.

This is an example of what Naomi Klein calls Disaster Capitalism. To be clear, we need some global flow of goods and services, especially for the purposes of responding to natural disasters, and we need international perspective, travel and cooperation to overcome the climate crisis. But, our priorities need to meet this moment. The level of attention, creativity and urgency that the global community put forth to the recent Suez Canal crisis is actually kind of inspiring. Now, its time for the multifaceted issue of the climate crisis to be prioritized in the same way. It is beyond time to treat the climate crisis like it is the massive ship blocking our future, because it is.

‘It’s not worth it:’ Petrochemical pollution burns across Houston

The city of Houston, Texas is often referred to as ‘the energy capital of the world.’ In addition to being home to oil and gas giants like BP America, ConocoPhillips and Shell, the Houston metropolitan area is dotted with petrochemical plants. Roughly 400 chemical plants employ 36,000 people, generating 40% of the nation’s chemicals and […]

During the CNN and New York Times Democratic Debate at Otterbein University in Westerville, Ohio, moderators did not ask a single question about the climate crisis. Twelve candidates sparred for three hours over topics including impeachment, Syria, healthcare, the economy, gun violence and women’s reproductive health, but they never directly addressed the hottest topic of […]