Last year, global attention briefly coalesced around fires ravaging the Amazon Rainforest. As the novel coronavirus, COVID-19, continues to affect the whole world, Branch Out reported in the past weeks that deforestation is the leading cause of new infectious diseases. In addition to threatening global public health, deforestation threatens the very existence of the Indigenous nations that call the Amazon region home.

The struggle of Indigenous people to protect their homeland greatly impacts the whole world, because further destroying the Amazon ecosystem may set off a ‘carbon bomb’ as soon as 2021. This chain reaction would release massive amounts of CO2 into the atmosphere that will accelerate climate collapse, while disrupting global water circulation and causing drought thousands of miles away.

Brazil’s first Indigenous woman elected to the Chamber of Deputies is Joênia Wapixana of the Wapichana nation. She recently gave an interview with CounterPunch where she explains what is at stake in the fight over Indigenous lands:

“We, Indigenous peoples, for many years have been reinforcing these values that come from our ancestors. This is not just an ideological discourse or a vague thought, but are necessary actions that we need to take to fight the climate crisis so future generations are not doomed…and to make sure that, in a few years’ time, we, as Indigenous peoples, will not be relegated to books and the past.”

Researchers believe humans first began living in the Amazon over thirty thousand years ago. Today the rainforest is home to at least 400 indigenous tribes, each with their own language and traditions and some even yet to have contact with the outside world. When over 3,500 square miles of the rainforest were burned in 2019, Indigenous communities lost much of their living space as well as the living forest which makes up the very fabric of their culture and identity.

“The forest is our mother, our house, our home. Without the forest there is nothing. There won’t be any indigenous people left,” Txana Sia, a member of the Huni Kuin, a tribe bordering Peru and Brazil in the western Amazonia, told NowThis. 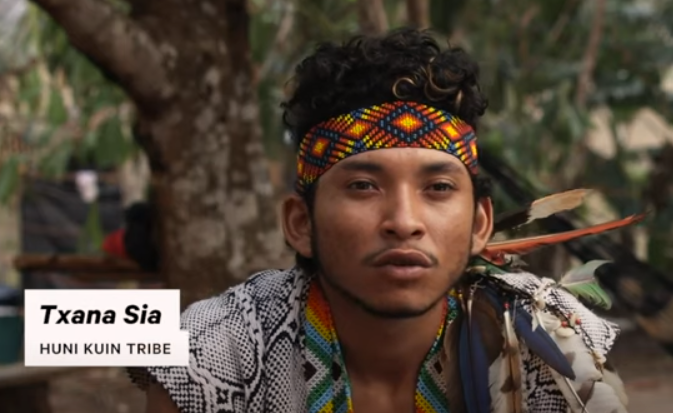 Fires in the Amazon are not necessarily a novelty, but because of increased deforestation for economic gain combined with climate change, 2019 has brought a particularly severe blow to the rainforest with over 2,240,000 acres scorched as fires continue to burn. For many indigenous people, the lack of accountability and aid provided by the governments responsible isn’t new, but the depth of the destruction and its impact on the rest of the world is.

Tashka Yawanawa, leader of the Yaminawa tribe who reside in the center of the Amazon Forest, told CBS News that the hardships faced by indigenous communities only become mainstream news when it affects colonizers and that Brazilian president Jair Bolsonaro has acted “totally against” indigenous people in his actions, notably rejecting $20 million in aid offered by the G7 summit to stop the fires.

“He wants to open indigenous land for mining companies and logging companies,” Yawanawa told CBS. “They say indigenous people have so much land for so little people. If we continue with this kind of mentality, we’re going to have a genocide in Brazil because we depend [on the forest] 100% to live…If we don’t have a government to protect and help us, we are going to sacrifice ourselves to protect our land.”

Yawanawa also told CBS that Amazonian communities witness the effects of climate change and deforestation in their daily lives, and that even though world leaders and western society may not address environmental issues now,  it’s only a matter of time before the whole earth is affected.

Wildfires rarely occur naturally in the Amazon Rainforest — most fires are intentionally set to clear land for resource extraction or grazing. As Buni, a woman from the Huni Kuin tribe, and her community used all of the water they had and failed to extinguish the flames that ravaged their home, the pang of industrial greed hit even harder than ever before.

“Nobody knows how the fire started here, but a fire was ignited here,” Buni told NowThis. “It was someone envious of us who set off our land into flames– to destroy us, to harm us.”

In 2014-2016, dozens of the Huni Kuin died due to pollution resulting in a  lack of clean water and basic sanitation. A documentary released in 2016 called Huni Kuin- The Last Guardian, features the words of Bainawá, a leader in the tribe. He discusses the spiritual significance of the forest and the spirit that dwells within it. Once the forest is destroyed, he says, the spirit will also die. The repercussions for such will weigh heavy on whoever attacks the spirit in such a malicious way.

“I am sure that when the forest is depleted, we will no longer have a spirit, because our spirit just lives in peace where the forest is there,”  Bainawá said in the 2016 documentary. “The rich and powerful ones, they are rich in stuff but poor in spirit, as they, the white men, do not realize the forest is a crystal clear portal.”

Furthermore, the Huni Kuin are already accustomed to a lack of accountability from government leadership. As the fires continue to worsen and indigenous communities need assistance or are forced to relocate, many are distrusting of what help will actually be provided to them.

“White men, Nawa, just think about a problem, never about a solution on a better strategy for the indigenous land and the indigenous communities that need health and education,”  Bainawá said in the documentary.

For Yawanawa, the fight to save the Amazon is not his community’s independent battle to save their home and way of life, the destruction of the world’s largest rainforest is a global crisis that affects everyone, and therefore everyone should join the fight.

From Maui to Mauna Kea: The Thirty Meter Telescope and an interview with Lanakila Mangauil

‘From Maui to Mauna Kea’ is a multi-part series written between October 2019 and August 2020. In part one, I share my research on Hawaii, TMT and the US Military, plus my experience traveling off the beaten path around the islands and interviews I gathered along the way. The world’s most controversial telescope is the […]

Playing with fire: the vicious cycle of deforestation

Global Burning This past August, a significant segment of world leaders attended the G7 Summit in Biarritz, France. The United States skipped out on the climate change discussion, where leaders turned their attention to forest fires, an often overlooked aspect of the climate crisis. Wildfires in the Amazon rainforest increased by an estimated 84% from […]