Youth climate activists addressed the US House Climate Crisis Committee and Foreign Affairs Subcommittee Wednesday, September 18. All of the committee members who spoke seemed to agree that climate change is a serious threat, but the congress members and activists clashed over how, and to what extent, the United States should act.

Here are quick bios and videos of the four activists’ opening remarks to the committees.

Greta Thunberg
The 16-year-old Swedish activists became world-renowned when her simple weekly strike outside the Swedish parliament became a global movement called Fridays for Future. Greta has Asperger’s, which she calls her “superpower,” and she has proved that no one is too small to make a difference. Now, after sailing across the Atlantic Ocean in a zero-emissions racing yacht, she is on a tour of North America. More about Greta Thunberg

Jamie Margolin
Jamie is the 17-year-old co-founder of the Zero Hour movement which organized a march on Washington DC in the summer of 2018. That march engaged youth around the country, with sister marches across the globe. From Seattle, Washington, Jamie is a senior in high school who is working to release her first book “Youth to Power” and also identifies as Hispanic and Queer. More about Jamie Margolin

Vic Barrett
The 20-year-old New Yorker lived through Superstorm Sandy and is one of the plaintiffs suing the US Government in the Juliana vs. the United States case. He is a first-generation American whose family immigrated from Honduras, where rising sea-levels have already forced many indigenous Garifuna people to become climate refugees. Vic is an undergraduate at the University of Wisconsin at Madison and also identifies as Black, Latinx and Queer. More about Vic Barrett

Benji Backer
Benji is 21 years old and also the only activist who self-identified as conservative. The Wisconsin-native is the president and co-founder of the American Conservation Coalition, a nonprofit that seeks to get conservatives more involved in environmental issues. Backer has been a featured speaker at conservative conferences like CPAC and Americans for Prosperity, which is funded by the Koch Brothers. More about Benji Backer

‘Listen to the science’

Thunberg, the most well-known of the four, offered the IPCC Report from October 2018 as her testimony and spoke very briefly compared to Margolin and Backer, who received the most speaking time. “I don’t want you to listen to me. I want you to listen to the science,” Thunberg told the house committees in her opening remarks.

For the politicians, this was a chance to show how seriously they take the climate crisis, but some of their questions demonstrated how unprepared they are to address the crisis. The chairman Bill Keating, D-Massachusetts, for example, felt the need to follow up and ask Thunberg to expand on “why it’s so important to listen to the science?” She seemed almost surprised at the question and responded with what should have been obvious to Keating: “I don’t see a reason to not listen to the science,” adding that “This is not political views or my opinions. This is the science.”

Keating wasn’t the only representative who asked Thunberg a question they should already know the answer to. Abigail Spanberger, D-Virginia, asked Thunberg if, in her experience as an activist, she had “heard stories” about “how climate change and the instability it causes internationally are impacting security issues and how those might impact future generations?”

Thunberg responds that of course she has spoken with people impacted by extreme weather disasters, but suggests Spanberger “talk to someone who is an expert in that area.” Wanting to get an answer, Spanberger follows up to ask for examples of those who have “faced disasters at home due to global climate change.” Thunbeg says there are “So incredibly many examples,” and she cannot find just a couple to explain to the committee.

Spanberger, who served for a decade in the CIA before representing Northern Virginia where much of the intelligence community is located, should already know who the expert is because in all likelihood they may live in her district. After Thunberg answered the follow-up question, Jamie Margolin jumped in to point out that there are Amazon Rainforest protectors in the audience whose security and culture are severely at risk due to the climate crisis.

Margolin’s interjection further shows that Spanberger is asking the wrong person. She asks Thunberg to convey other people’s experiences of climate disasters when she could have asked Vic Barrett, who had already mentioned being directly impacted by Superstorm Sandy. Barrett, the only Black activist providing testimony, did not have a single question addressed directly to him.

‘Look your children in the eye’ 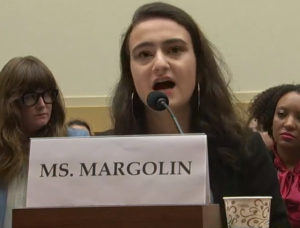 While most democrats’ questions were weak, Kathy Castor, D-Florida, deserves credit for prompting one of the highlights of the testimony with her question. Before Castor’s question, Republican congressman Garret Graves of Louisiana had gone back and forth with Thunberg and Backer. Graves was trying to argue that the US has already been a leader in reducing emissions, and our top priority should be forcing China and developing countries to reduce their emissions.

Castor follows this by pointing out that the US has historically been the biggest emitter of greenhouse gases, and currently is the second biggest, behind China. It’s an obvious clapback at Graves when she asks the activists to respond to “some people [who] say that the United States should not dramatically reduce our emissions because China and other countries aren’t doing enough.”

Backer did not come to Graves’ defense, saying its “A false approach because we’ve never in history looked at a problem … and said ‘well if its happening somewhere else, then we shouldn’t fix it.” Barrett echoed this, adding “If we’re the leaders that we say we are, we need to lead by example here.”

Thunberg kept her answer short, simply pointing out that in Sweden where she is from, people try to use the same logic to delay action: “Why should we do anything? Just look at the U.S.? So just so you know, that’s being used against you, as well.”

Margolin is the one who really squashed this argument, calling it “shameful” and “cowardly.” “This is all about being able to look your children in the eye and say I did absolutely everything I could for you,” said Margolin. She asks how parents can justify telling their kids “I didn’t act like it was an emergency because our neighbors over there just weren’t doing it.”

A Crisis of Capitalism

All the activists agreed that the US must be a leader in reducing emissions, but the main difference between the testimony of Backer, the conservative, and Margolin, who supports Rep. Alexandria Ocasio-Cortez, revolved around whether free markets will solve the climate crisis.

Margolin used the moment to declare that her generation did not want to be called Generation Z “as if we are the last generation,” and that they would now be “Generation GND: the generation of the Green New Deal.” Her intent is to call for a cultural change that “celebrates, encourages and enables radical climate action.”

While she stops short of explicitly calling out capitalism, Margolin makes clear that solving the climate crisis must involve addressing its relationship to “colonialism, slavery and natural resource extraction” which are key features in the history of capitalism. She calls out the animal agriculture industry and the fossil fuel industry for contributing to the crisis.

The clearest statement from Margolin that capitalism is at fault came later when she referenced Albert Einstein’s definition of insanity, “trying to solve an issue with the same thinking that caused it,” and said “We are trying to colonize and buy and sell our way out of a problem caused by colonization and buying and selling.”

Backer, on the other hand, criticized “one size fits all approaches, such as the Green New Deal,” adding that “markets and competition reduce emissions far more than heavy-handed regulation.” He praises those on the left for making people pay attention to climate change, adding “but now it’s time for solutions,” to imply that only a conservative, free-market approach will solve the issue.

To back up his claim, Backer cites the fact that many US companies have made commitments to run off 100% renewable energy, and the production of clean energy has been increasing. “Innovation is something we can export to other countries very easily,” he said, presenting an optimistic view that the United States can use technology to reduce emissions and then spread new technologies, such as carbon capture and “decarbonizing fossil fuels,” around the world.

Hopefully, the committee members learned an overdue lesson on how the climate crisis is already impacting young people around the world. Many of them, however, asked questions that they should already know the answer to, or worse, spent all their time giving platitudes either about how serious the crisis is, or how technology will solve everything, without even trying to ask a good question. Overall, the politicians appeared deeply uncomfortable confronting their role in the crisis, and their recent support for the youth activists will be an empty gesture if it is not paired with legislative solutions and meaningful acts of solidarity.

And while the conservatives argued that the free market can solve the climate crisis, not once did Backer or any republicans on the committee mention the billions of dollars the United States spends every year to subsidize oil and gas. The Guardian reported that the US spends at least $20 billion each year directly subsidizing fossil fuels. An additional study by Securing America’s Future Energy reported that the US Military spends $81 billion each year to protect oil supplies. And the International Monetary Fund estimated that globally, fossil fuels received $5.2 trillion in subsidies in 2017.

In addition to not mentioning the role of fossil fuel subsidies, no one in the hearing mentioned putting a price on carbon pollution, which in theory, would incentivize innovators to move away from fossil fuels without any government mandate influencing the market. The argument for free-market solutions that doesn’t address the way that the market is already built to favor fossil fuels, falls flat of addressing the seriousness of this moment in history.

Margolin’s conclusion, that “the youth are calling for a new era altogether,” is ambitious, but unlike Backer’s approach, it recognizes the roots of the climate crisis and calls on the government to stop supporting fossil fuel extraction. If there is a new era coming, it will start tomorrow, September 20, when youth and adults alike will strike to demand climate action in the largest global demonstration in world history.

Coronavirus and the Climate: A Singular Crisis

Introduction The ongoing pandemic of the novel coronavirus – COVID-19 – is already affecting all our lives. While the full extent of its spread and resultant mortality is yet to be seen, there is no doubt that in terms of media coverage, social dynamics, economic consequences and government reaction, something unprecedented is happening. Far from […]

The Brazilian Holocaust: Anti-Indigenous Fascists are on the brink of destroying the Amazon Rainforest – Join the Boycott to Stop Them

Introduction A teenage member of the Yanomami Indigenous Nation, from deep in the Amazon rainforest, died of COVID-19 this week. Many news outlets reported that this demonstrates how widespread the Coronavirus has become, but few have connected the dots from this tragic death to the forces of capitalism, the Brazilian government’s genocidal policy and attitude toward Indigenous […]