As record heatwaves have swept the Pacific Northwest this Summer, Branch Out has been on the ground in Central Oregon involved in drought and wildfire resistance projects for both immediate relief and long-term resilience in the face of future disasters.

Following the guidance of our Elders, we will be making biochar to convert flammable brush into organic soil amendments and batteries to feed, heal, and power carbon-negative ecovillages. We are implementing and accelerating designs to conserve, channel, and replenish water within an ecoregion struck by a once-in-a-millennium drought.

But we cannot succeed without your help. Branch Out is seeking workers and volunteers to join us on the ground and assist us in this effort; and donors to enable us to fund our projects with our partners.

Any donations of money or supplies such as tents, sleeping bags, blankets, pillows, solar panels, batteries, etc. will help us immediately expand our capacity to supercharge our ecosystemic defense against climate collapse in ways with both immediate and long-lasting local and planetary benefits.

Our goal is to implement and share techniques that can be replicated to help people and communities break free from fossil fuel-dependent infrastructure and achieve regenerative self-sufficiency in their own context.

This article is the first installment of our report from the field in Christmas Valley, Oregon, by James Balanoff and Thomas Harun 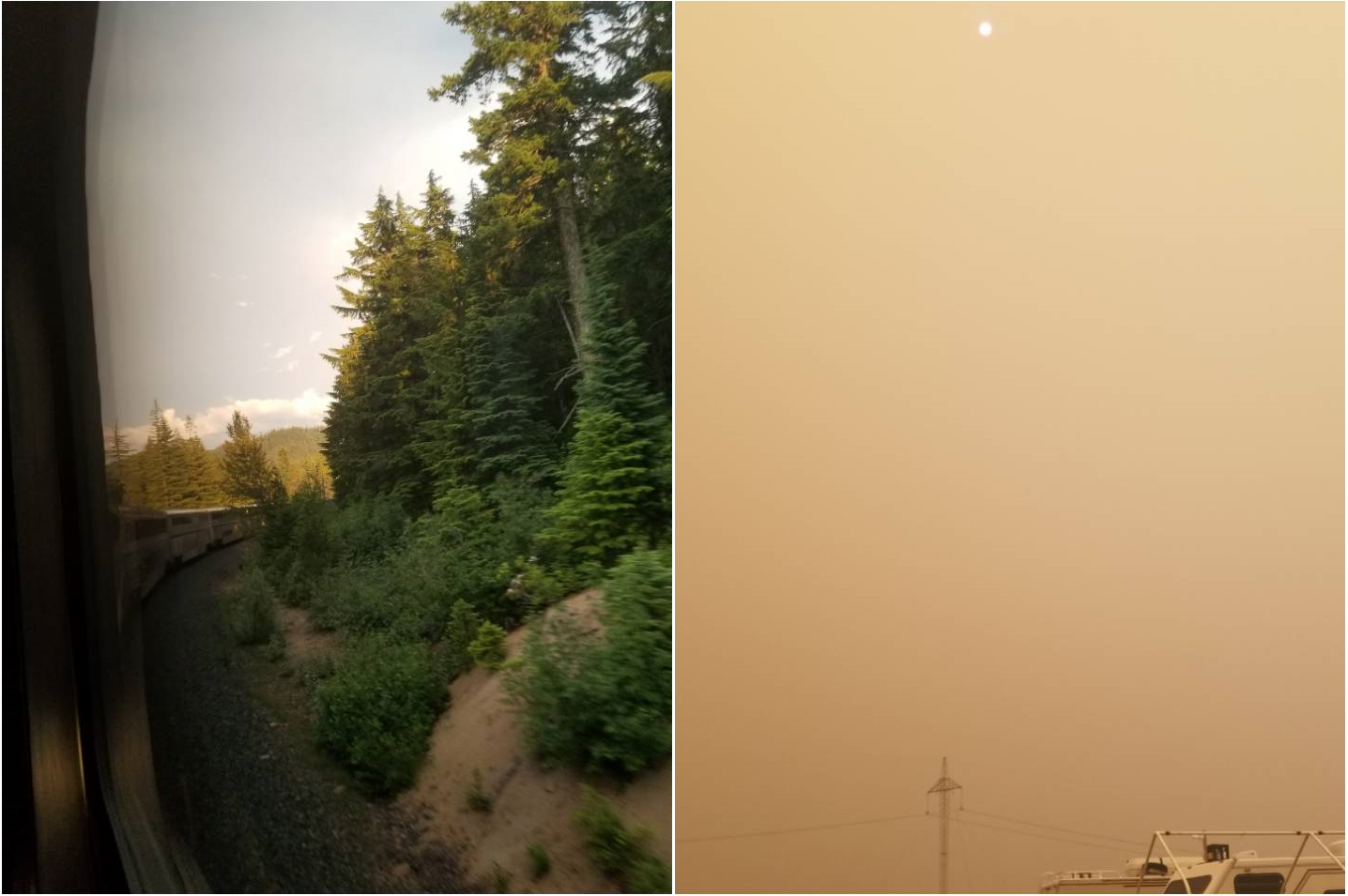 Having arrived by Amtrak in Portland, Oregon for what just happened to be the hottest day in that city’s record, your correspondents in Christmas Valley did not make it here ‘on time’. We were waylaid, namely, by the once-in-a-millennium heat dome currently bringing the whole Pacific Northwest region to a boiling point; the national rail company’s scenic ‘Starlight coastal’ had halted its daily line from Seattle to Sacramento, owing to unheard of heat alongside wildfires. While we have made it to the valley (really a mile-high salt basin left by some aeon old great lake) news of these torched forests occupies the skies above like a specter, occluding daylight with a ghostly Instagram sepia. The sun at such smoky hours is red, yet unhot, striking 1 as insanely lookable.

Out here our hosts, tireless as they are generous, worry more for others than for themselves. Through one nonprofit, having already given refuge from the fire to a dog + her newborn litter; through another, feeding the local community on a regular basis and firefighters at this time of emergency; through a third, providing transitional housing and planning to provide mutual aid for newly displaced persons.

Although smoke fills the horizon, their plot lay quite a ways from the woodlands ablaze on the other side of an imposing ring of mountains completely surrounding us. Instead, this area might be called an arid steppe. Days here tend to be long as the horizon, dry as dust + hot enough to grill cheese (more on that later). Ironically it is only those ominous clouds of smoke that offer us any consistent shading; the nearby unincorporated village, coined ‘Christmas Valley’ in the 60s by a property peddling confidence man, lives up to the title with a similar sort of irony: homemaking in terrain prone to extreme temperature spikes — from day to night + from summer to winter — as all about us a deathly haze suggests how soon millions of homes may be overtaken in such hostile environs, while this very warning keeps us cool? Call it Christmas Valley in July.

For all that 1 breathes easier here, under heavens covert in an opaque gauze, this great lake salt basin gives berth to flammable branches of another sort: vast mazes of Sages abound around us. Well adapted for such desperate conditions, a wide variety of sagebrush informs an internest-of-things underneath + between our makeshift ‘off-grid’ installations + in every direction of our immediate surrounding, as if to declare this here an instance of the Great Sage Lake. Prior to colonization, leafy ‘wormwoods’ were better cared for (e.g. by the Northern Paiute), cultivated with grasses + cleared of the dry brush + giving in return a source of incense or salve.

Then transplants intent on territory staked out the field of a so-called ‘Sagebrush school’ (ecoliterary taproot for a certain ‘Mark Twain’ among others) such that removal of Natives + settlement by colonials led to sacrifice of grasslands for grazing cattle, feeding back into the soil’s tendency towards desiccation, or desertification. Today, it is easy to perceive the brush — its tinder overhanging every plant like dead coral — threateningly, if nothing else than as a potential fire hazard.

Nevertheless, when it comes to massive proliferating woodland wildfires from over the mountains, our Sagebrush Lake offers a vital form of protection. With these bushes – which are much shorter than the trees of towering forests – preventative controlled burns by firefighters can create a large buffer in case of emergency.

Meanwhile the Sage themselves enrich the soil + create shade, giving habitat for a menagerie of moths, flies + ants, beetles (small/burrowing + big/airbound), spiders, grasshoppers, scorpions, lizards, jackrabbits, chipmunks + coyotes, as well as an assortment of grasses + fungi. Digging even deeper, our attempt at uprooting 1 such brush revealed that the term wormwood (Biblical connotations notwithstanding) was accurate at least in terms of these winding, obstinate roots that lace laterally indefinite matrices along acres of hardpan. Nowadays, some local farmers fear Sage cultures for their ‘infectious’ quality + eradicate their beds, favoring Alfalfa monoculture. However, if the labyrinthine bush — with its genetics agential as a viral media — did become brittle because of our neglecting culture, then taking the plant for an enemy-at-our-gates is (as far as these authors are concerned) yet another fool’s errand. 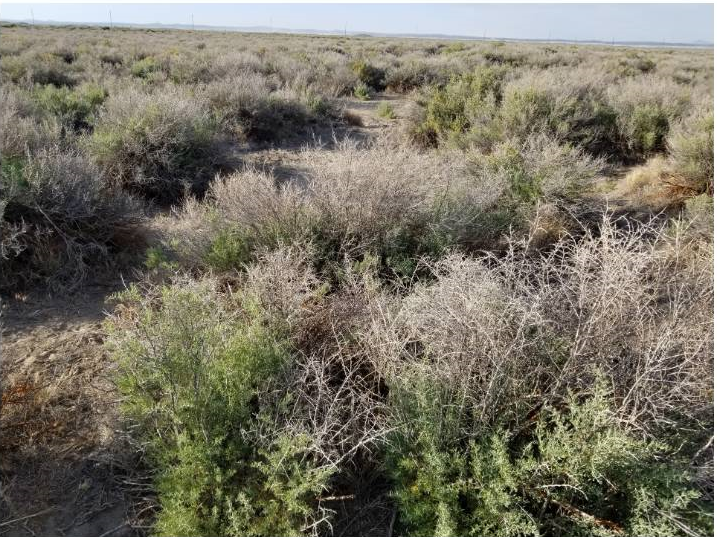 With the time we have, then, your faithful correspondents plan to work with rather than against our nonhuman relatives. To begin, we will focus on trimming the brush of grey matter, a prevailing prickly kindling; immediately, this action makes the land not only more flame retardant, but also generally greener + more navigable. Simultaneously, this process yields an abundance of organic refuse, which we plan to reuse in the medium of biochar. Such a system would char our brush in safe & contained units, while capturing a good mass of carbon, thus providing a serendipitously carbon-negative ‘mother lode’ of composting accelerants + micro-organism domiciles for the soil.

From this fortuitous arrangement — still emerging — perhaps we may attempt to draw some Sage advice: confronted with a landscape of intensities, do not seek to control its dynamics, but rather channel their cadence in your everyday. From sageleaf to drybrush to biochar to topsoil flows the cadence of life + death (‘cadence’ being not just musical, but per a shared root with ‘case’ + ‘cause’ refers to all that befalls us, the rhythm of its turning). Branching out by this principle we intuit how a sun that forces us inside by noon, or the windstorms that dust all our belongings, conceal in such thundering metronomes the secrets of our survival.

In the first case, we were inspired by Kaossara Sani, a climate activist who works on reforestation projects in Africa’s Sahel region, to build a solar stove. We then learned in Moses from Uganda’s succinct instructional video how to create one from nothing but a tire, a glass to cover it, paper for insulation + foil for lining. This carbon-neutral cooking method is low cost + easy to construct; it moreover attunes your mealtimes to the inflections of daytime. 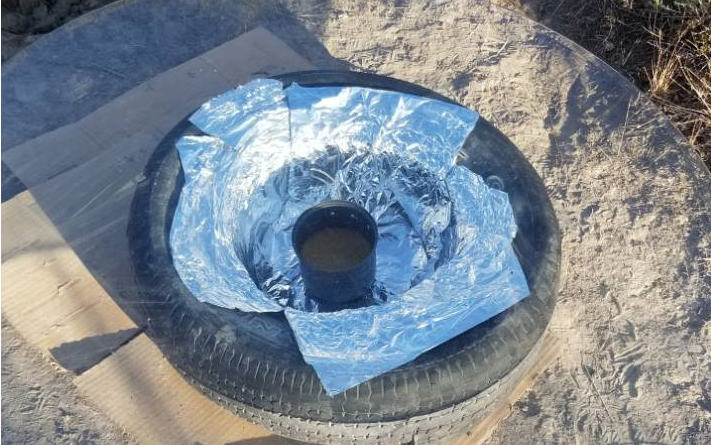 As for the deployment of airpower, our next project (after biochar) is to configure wind turbines connected with compost barrels, accelerating the fertilization of soil through frequent rotation. Again, an antenna attunes 1 to the force that disperses the sands exactly as it composes compost.

Turning inward, we find that in this community another renewable power source, named by one of its operative non-profits: Restoring by Serving. Our gardening of the Sagebrush Steppe would not be possible without the help of our hosts who have generously supported us in our projects + efforts. From the guest home where we have stored our belongings, to the gardening tools + other amenities they have provided us, they have equipped us with both the space + means to achieve our goals.

In the spirit of reciprocity we are determined to give back this summer by supporting our hosts in their fire relief, with fundraising, and with other efforts. Already, they have an abundance of preserved + canned food stocked up; families displaced by last year’s intersecting crises have made homes here recently as well and have also been helping us with supplies. As wildly as the fires spread, we aim to keep our heads + do the work, culturing Sage, contributing to the garden/dwelling plot this community intends to build out as fire-resistant, carbon sequestering + expressly established as free temporary homes for any in need.

By supporting us in this effort, you can help deepen our impact amid the growing wildfires + a collapsing climate. To demonstrate successful carbon-negative survival strategies in a land of extremes will service all creatures in preparing for and preventing intense upcoming disruptions. We strive to mediate any such metabolic model in simple + easily replicated constructions. With the Sage + its biosophy at our side, we pray to recover an oasis in the desert. 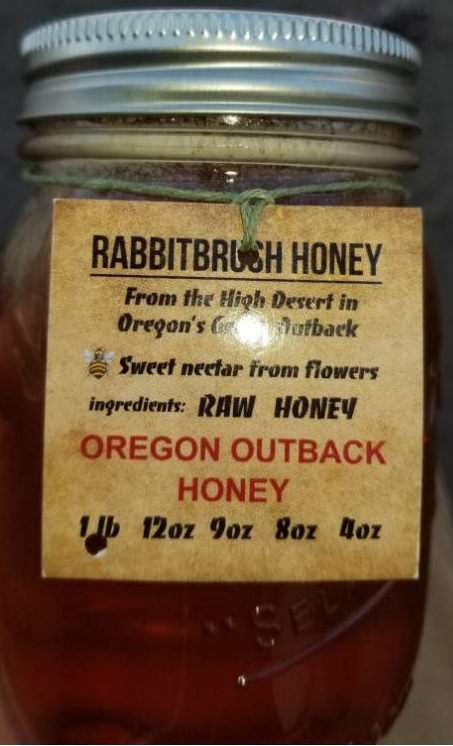 The Brazilian Holocaust: Anti-Indigenous Fascists are on the brink of destroying the Amazon Rainforest – Join the Boycott to Stop Them

Introduction A teenage member of the Yanomami Indigenous Nation, from deep in the Amazon rainforest, died of COVID-19 this week. Many news outlets reported that this demonstrates how widespread the Coronavirus has become, but few have connected the dots from this tragic death to the forces of capitalism, the Brazilian government’s genocidal policy and attitude toward Indigenous […]

The human lessons to learn from redwood ecology

Traveling along the Pacific Coast of the United States, it is impossible not to marvel at the enormity of coastal redwoods, known scientifically as Sequoia sempervirens.  Redwoods shoot up to more than 320 feet high, and some are estimated to have lived about 2,500 years. These skyscrapers from nature hold secrets in their biology and ecology […]

Hemp Supercapacitors and the Future of Carbon-Negative Energy Storage

New research shows that hemp supercapacitors have the potential to fight climate change by improving how we store renewable energy, while also sequestering carbon from the atmosphere back into the soil and hemp biomass. As the world continues to expel 33.1 billion metric tons of carbon dioxide into the atmosphere annually, scientists are searching for […]